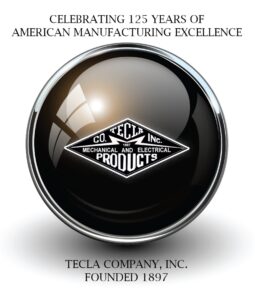 TECLA COMPANY, 125 YEARS YOUNG
A brief history of the company and the inventors who inspired us
By Dick Clark

Tecla, based in Walled Lake, Michigan, was founded in 1897 by Thomas E. Clark, the grandfather of brothers Robb, Jeff and Dick Clark, who have been managing the business for more than 50 years.

We have a team of next-generation family members and colleagues trained to someday take over management of the company. It is awe inspiring to us all how innovation has changed our lives – and those of our customers – over the decades, and how it continues to do so.

In celebration of this, Tecla’s 125th anniversary and of the spirit of innovation on which Tecla was founded, it is our great joy to share this brief history of our grandfather, the other inventors – including Thomas Edison, Henry Ford, Nikola Tesla – he worked with, and how they influenced him and the company whose name still bears his initials.

Thomas E. Clark, the making of an inventor

It was there that Tom was first exposed to telegraph communication, learning Morse Code and, sometimes to the exasperation of his bosses, taking telegraph keys apart to see how they worked. He soon went on to become a night telegraph dispatcher for the railroad. Understanding telegraphy then was like knowing how to write computer code today and was foundational in building his career as an electrical engineer and inventor.