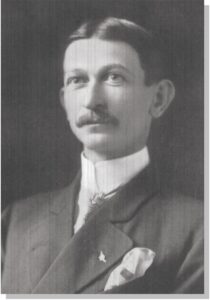 Thomas E. Clark introduced wireless communication to the Great Lakes region.  He was an innovator and visionary experimenter.

Clark's many inventions and patents include improvements in such diverse areas as display cabinet lighting, electric fans and heaters, humidifiers, looms, wireless telegraphy as well as voice transmission, electric cars, car and police radios, wireless railway train control, and automobile safety around railroad crossings.  He was the first to equip steamships on the Great Lakes with wireless and he placed stations at strategic locations on shore to communicate with them.  He was the consulting engineer when one of the first commercial broadcast stations (WWJ) in Detroit came on the air.

Clark counted many famous people among his friends, including James E. and William Scripps, Ty Cobb, Walter W. Massie, A. Frederick Collins, Nikola Tesla, Henry Ford, Charles Steinmetz, and Thomas Edison.  He was as devoted to his family later in life as he was to his work earlier, but he never bragged about his great accomplishments.   Although he was a great storyteller who enjoyed sharing his experiences with his family and friends, he never sought the fame and fortune that he deserved and that other inventors of his time valued so highly.  On April 17, 1909, one hundred years ago, the Sunday News of Port Huron, Michigan, called Thomas E. Clark an electrical genius and the "Wireless Wizard."  Famous people and people who were key researchers in wireless and radio development are shown: (see Wikipedia articles; History of Radio & Wireless Telegraph).